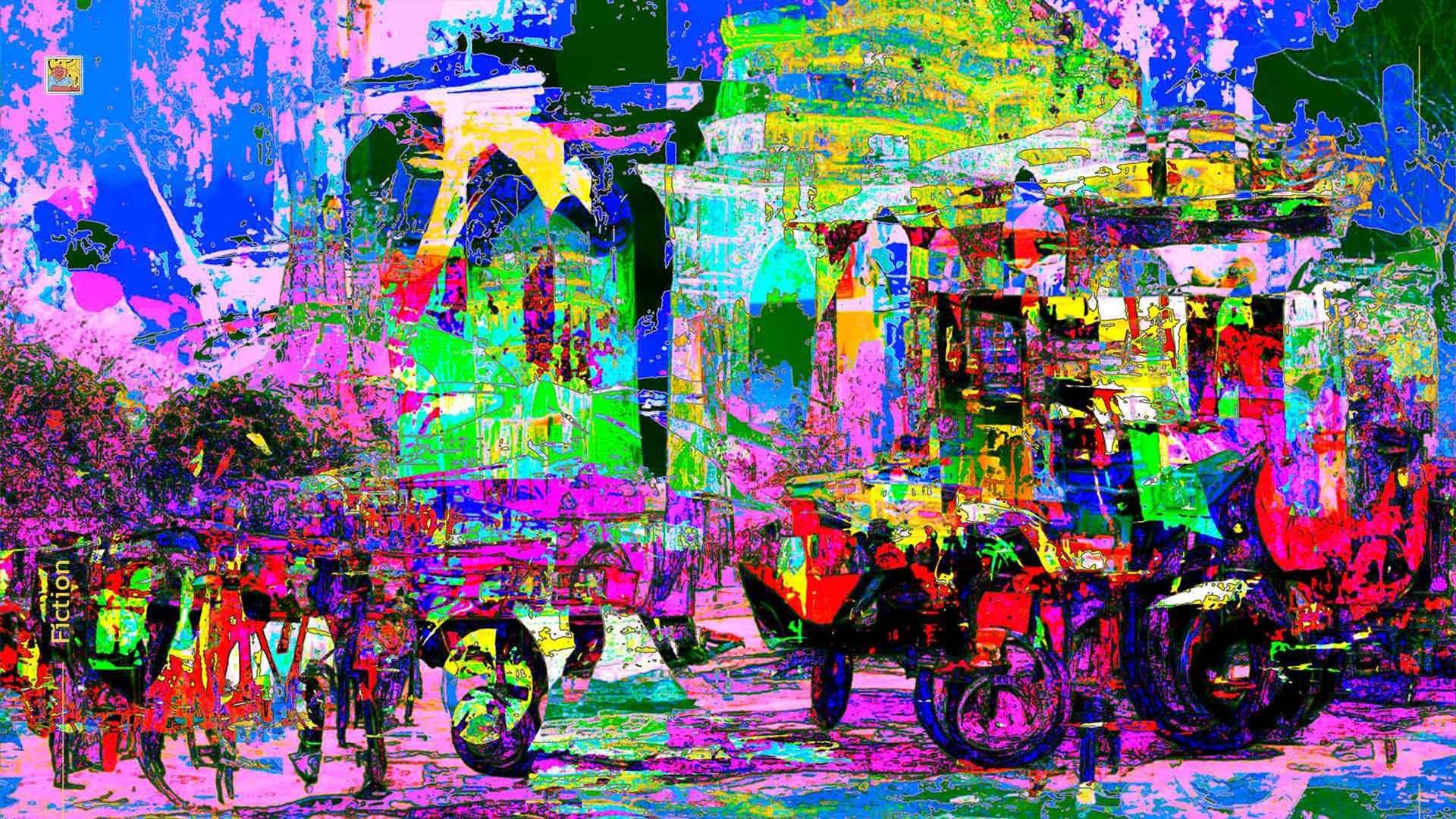 Between graffitied phone numbers and peed on film posters hid the well rounded face of the future. A beady eyed, double chinned profile that had broken into the collective imagination only recently; charming the city with his silent and repetitious gestures moving on every holographic signage and augmented social.

And against this wall stood the Delhiwala Juice Stall. A decked mesh of lights and glass serving a variety of unhygienic juices — the proprietorship of Ram Dass, with two eS’es in his name. “Arre!” He exclaimed to his customers, “This is the most famous juice stall in Lado Serai!”

Having nurtured fifteen failed businesses, his claim that he already ‘was’, not ‘would be’, the ‘most famous’ juice seller on the first day of his juice selling was a manifestation of this thing called the ‘Delhi confidence’. A sister terminology of — ‘Bhai sab ho jayega!’; the beloved phrase of every Delhiwala.

And with a mix of unconcealed excitement and an unhealthy blend of shrewd persistence, he turned his business into the most sought after hangout in these parts. Not to mention the towering blessings of the Qutub Minar behind him.

There was one problem though…

Actual fruit had completely disappeared from the city, which meant that for small businesses like the Delhiwala, there were none available.

No juice at the juice stall. Let that sink in.

“Music! Haanji!, music,” He mentioned to his wife’s surprise.

“But I have never heard you sing?!” She exclaimed as a perplexed look clouded her face. The dread of hungry nights crept in. Fighting against her reaction; hoping that he would forget all about it by the next morning.

But forget he did not!

“Tara!” Ram Dass called for his wife the next morning. “The Devi. The Devi Tara! Spoke to me in my dream.”

Tara entered the room with a spatula dripping with tadka. The lingering dread from last night now turning into a sinking anxiety.

“Tara! Tara! Tara!” He danced around her excitedly. “The Devi asked me to go find an antique radio from Lajpat nagar, it will make me the most famous juice stall in the world. I told you na. Music! Music, Tara.”

Tara stood there staring at him partially smiling with her eyes.

“She also wants me to help her a little bit,” He continued.

“She wants me to help that drunk near the shop.”

The tadka dripped onto the floor.

But it worked. The Devi’s blessings!

The Delhiwalas came for the Delhiwala and huddled around his radio. Day after day, eager children hung from car windows and street urchins danced to its rhymes and rhythms. In the evenings the residents of the neighbourhood gathered at the cart to share stories of their youth. Soaking in reminiscence. The younger rejoiced in a dust soaked communal dance.

But the city changed. First the buildings around him grew denser. “Now there are people from Bangalore, Sikandrabad, Patna and everywhere else but here. Very nice all of them.” He would tell his wife sometimes. “But you know, the cost of fruit mixtures have gone up again. I will have to increase the prices.”

Then the residential buildings were turned into offices; and the conversations changed along with the music. Now there was optimism about the future and a steep rise in prices.

“Will they pay more?”

“Arre, they made this city what it is. All these people. Some of them make drones, while others make the things that make those drones work. Now they all need a break from all that, so why will they not pay? Smart no I am?” He asked Tara, smiling with mistrust. Wanting her affirmations.

The prices were raised, and for whatever reason the people paid more for the fruit juice with no fruits.

But as the flavours of his prosperity started to bulge around his waist, he conveniently forgot about his half of the bargain. The man became the city. Forgetful at best and gloriously ignorant at worst. Cocooned in his plump comforts, he had not in all these years spent as much as a moment thinking about this change.

In the fifth summer of his self proclaimed success, the heat wave in Delhi was devastating. Delivery drones were dropping from the skies injuring people. The metropolis has reported mass hallucinations; some cars had even been reported to have parked themselves in their designated spots.

Drenched, Ram Dass stood under the shade of a thinning tree, parched. Dazed and confused, a song by the late great Lata Mangeshkar played on; her voice a sweet respite in the heat.

Unexpectedly a painfully hot blow of air tore through him from above as a silvery drone hurried on. “Youuu Basket!” He swore at it. As if it cared. And turned to hook the wires for the wireless device that powered the radio.

The street camera turned to him, scanning his movements. A voice from the tree rang out, “Sir, please sit down. Your heart rate is elevated.” Relaying his movements to a distant server that computed him with alleged quantum accuracy.

His fidgety anxiety growing under the assessment as it continued, “If you need assistance, one will be provided to you. Please press the red button.” The voice sounded just as human as any, distorted by the quality of the loudspeaker, but the knowledge that it was a computer somewhere in a building overseeing him constantly hit home as the heat and petrol fumes brought him back from his reverie. Loud manic honking ringing all around him. He noticed in the distance a group of children moving in slow synchrony with the traffic. Dancing and scratching the cars for their day’s fix. The drunk made eye contact from across the street.

He felt fear, and shame. And fear.

He had ignored the drunk all this while. ‘What could he do?’ He told himself almost always that this thought came up.

Just then a police van stopped in front of the ‘no-parking-no-stopping’ sign. Hurriedly, the camera turned away, now studying the cars wheezing past in arrogant urgency.

The camera turned back.

The tall figure, drunk enough to be jailed stuttered onto the pavement, promptly falling in front of the Delhiwala, and immediately regretting the scorching concrete radiating on his face. He raised his fist to the sun. For just a second all his senses returned and then casually slipped away. The few people standing around ignored him with practiced perfection. Passersby crossed to the other side.

His face was a sight to ignore with months of sweat streaking into dark streams as Ram Dass stared at the slumped mess in front of his shop. The words of the Devi appearing and disappearing in his mind against the stench. Ram Dass could not bring himself to come close to the man, let alone help him. As if there was a forcefield barring his empathy.

Not knowing how else to react under the watchful gaze of the cameras. Pointing to the man, as if leading their attention, he started shooing the drunk. But the recluse was camouflaged in his obtuse marks. And the cameras were blind to his presence, only focusing on Ram Dass.

“Sir, if you need assistance, one will be provided to you. Please press the red button on the tree.” The algorithm in digital politeness reminded him.

He pressed the red button! A magnificent metropolis of sensors wove quick binary rhymes into the ever awake and interconnected web. The hive responded.

“Thank you for choosing Magnum emergency services. Please be patient as our drones will reach you shortly.”

Ram Dass breathed the hot wind in relief as a swarm of drones could be heard nearing.

The drunk awoke to the chaos wondering where all the fans were in the sky. His tattered clothes revealed a little too much as they arrived. He mumbled incoherently toward them. Talking to them; offering a drink.

But he was not heard — nor seen. His dirty and degenerate state merged with the pavement he lay on.

Without so much as a soft word; four hydraulic arms lifted Ram Dass instead, ignoring his protesting feeble arms. An oxygen mask was placed onto his face as a stretcher scooped him from under.

“No! Not me!” He cocked his head to point to the drunk on the pavement. “Him!”

The drunk man slept in poetic ignorance. Merging with the city. Unseen.