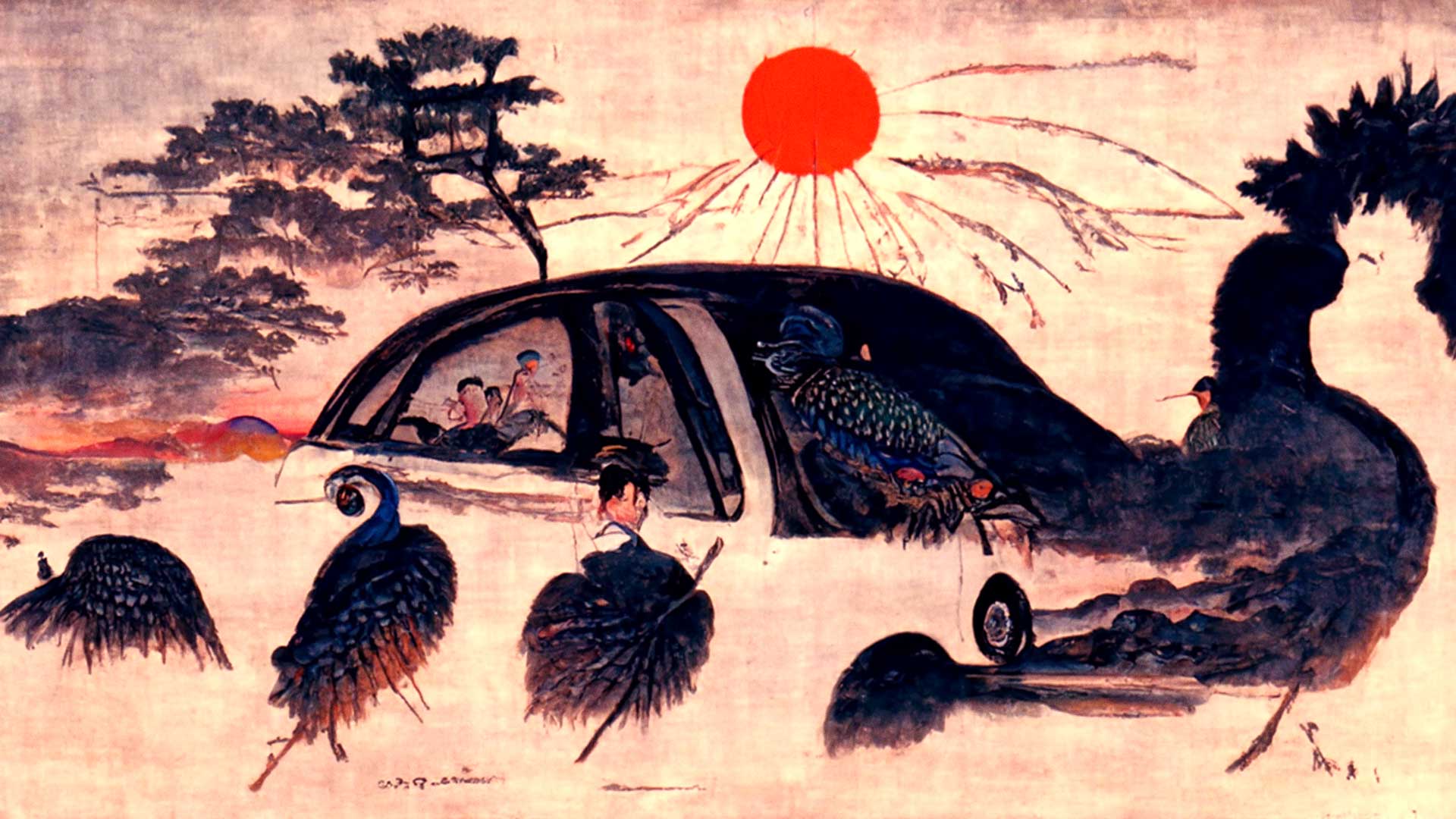 I believe that a sudden mellow wind, the kind that sweeps from within a creature but feels like its coming from somewhere way outside and afar and is sudden; and with much discomfort, lifts a boy or man, or any creature for that matter; lets say a dog (assumption), had lifted me up. I think I was in love.

It happened at partial night, the span of light and dark, together – when the moon presents itself with bold vigour and the sun; desperate, tries to engulf it into oblivion. To erase its mere vision (But shallow deeds and thoughts are hardly ever rewarded). Evening. I was walking out on a grey road. Straight and unconscious, conscious of only the humming of my thoughts.

— Walking down the city of dreams,
Walking Striding my city screams.

A pompous loud car swam by my side at great speed.

— A little to the left and the reason of man would be dripping in soft red haste, dignified be our death. Amen. Dimensions change form with slight hurt. Do we all hurt? Is pain a thought or a feeling? Or both simultaneously? Does death bring peace? Or is it merely an excuse to change form. “I am tired of these clothes, let me put on this new one,” so said my soul to nature.

— Bring me the sweating pain of a dime,
And I will gladly show you all of mine.

— Reproduction is the beginning of death! “Strange thought”. But then death might be the point of reproduction of some other circumference. Something else. Something that we do not understand. Morrison says we are looking for something that has already found us. Could this be the probable reason why we do not understand? Or may be we do understand but do not realise. Can that be true? The true depth of the realisation of an understanding has nothing to do with the education of the mind or the nurturing of it with-things-fed. It can only reciprocate to one stimulus; experience. Then what is survival? An act to prolong the attainment of death!

I hopped to cross a pothole and landed on my left leg. Tried to balance myself for a long moment. Just like that. And started to walk again. Strangely not many people were there on the road. May be it wasn’t a weekend. I can’t recall. I won’t hold myself in contempt for that. I was looking straight. Trying to figure out the path an arrow would take and where its mark would be, if I was it. And suddenly. A pair of eyes, clear as the morning sea. Full. Vast.

– Your eyes are pretty loud little girl
They remind me of fresh begotten pearls
What ocean do they carry?
Or within it do they vary?
Such wet wisdom and waves
I hope my life it saves.

She was coming from the other side and she caught my eye. I wasn’t staring. She held my gaze for some precious moments and then let them fall. Like an eagle. Eagles circle their prey for a period of time, from very high in the sky. They have the eyes of the gods. Then suddenly plunge into something that resists it. It wants to dig at higher speed. The resistance is not something it can understand; only that it knows there is something that will resist it. She let her eyes drop. This was the resistance, but I wanted to continue. I wanted to penetrate through the resistance of a stare, and look into her eyes. I turned back and she was about to enter a shop, along the road.

She looked back to look at me and I could see them. Her eyes. You could find all the knowledge in a sight. Blasphemy. Religion. All of it is a gesture. Those eyes are my prize. Let me look into them. She carried oceans and rivers and lakes full of mountains of future. Not one but two. Beautiful both of them were too. Her black hair as if insulting all of nature. Calling. Competing. Can you compete? Oh! Beat me? What a joke! Her lips I remember were red. I had once tasted a strawberry. It could not satisfy my imagination. The lips of Hera. A symbol of sensation. I want to hear all that they could speak. To me. She wore the feathers of a peacock. Rich and vibrant. I wonder if she could dance as well. All pause to hale and rejoice this beauty.

– Goddess of delight
Hold on to this night
I need your arrow
To mark my dreams.

Vhrooom! Screeech! A car pauses. Three men look at her; one smiles. There is no surprise. She does not recognise them. They rush out of the car. The eagle comes to its prey, unheard, unannounced and unwanted, at an odd hour. It picks it up, lifts it and swoooooom…there goes the prey, I’ll see you some other day. But it might not be in this world. They picked her, not in a manner that you would pick your girlfriend or your wife. She screamed.

– I have sensed a scream
Its shrill I have seen
Not heard for I was blind
I’ll see her at the end of time.

— Protest is a liberty in a democracy. I have forgotten what they call it in a dictatorship? They carried her to the car. Those beautiful eyes. I saw the river that flows from the hair of Shiva. It was not as pure. I tried to move, to protect. Something that in a strange void of reason and thought seemed to be mine. But what was I to do? They forced her into the car. The streets were crowded now, with silent spectators and wise council: don’t involve yourself. Fear is not something you can hold in contempt. It’s plain old wrong. The spectators of ruthless safety didn’t move. I didn’t move. The engine gunned. A recollection of movement in the stomach of the car. The car says I can turn the wheels real fast, if you can provoke me to. The man, who had smiled, was now provoking the car.

– The wheels may turn
And they could burn
Too fast, if, along
The road you went.

There was an explosion. Loud and clear. Something was burning, was it my soul? The tires had caught fire. Shaking as if hot with fever, yellow fever. The car stopped and shivered. Out flew a dove, from the window. Some feathers of the peacock. Stripped out of her body. Beasts prefer their feast carved. Two men ran down to the car. They picked up the feathers and were trying to smell the tattered piece. Not all senses function at the same time. The mind can only act at one thing. Was no one was expected to hear her screams? You could either see or smell. We are humans after all.

– The dusty devil,
dawns,
we were copulated mere,
pawns,
Satan come and save me
these beasts are worse than thee.

A young boy moved. David. His sling in his hand. To save the world from the soul of the stone. He flung himself towards the car. He was running. I didn’t know what he was doing. He picked up a piece of brick that lay beside the road. Lazy and alone, no one cared for it. Abandoned, he gave it glory. He threw it towards the car. The sound of breaking glass has always attracted human ear. It’s the multiplicity of that one sound that it wonderfully attractive. The crushing lets say humming sound, the clinging of it, which sticks to the ear.

– A serum becomes the rock
Held within your palm
If courage was in stock
Within a righteous arm.

He didn’t realise that there were more men behind him then he could expect. He didn’t care.

— There is a small dot of a point of contact between absolute fear and Achillean courage. It’s unpopularly called the point of knowledge of one’s moral premise. Where man is ready to deny himself guilt and thus stands up to his own standards. Without fear. Without care of the hypocritical wisdom of the social construct. It takes a moment to decide. Just one.

— Who made you the strong?
Was it not those staring eyes?
Listen to the sound of the dumbfound!
You’ll unearth things you’ll despise.

The three turned. Saw. Ran. The girl lay there in the car. Bleeding arm and blood pool beside her head. Her clothes torn. Feathers of the peacock. Brilliant and lost. Pulled out with a vengeance of guilt. They were bread with it.

— To keep it in your gallery
In a careless pot of gold
To show to Mrs. Hillary
How high your head you hold
Not your fault Mr. Gunner
You did what you thought was told
It was the fault of the simple feather bird
That thorn instead it did not grow.

The glorious stone had hit the car at the right time, she was only hurt. Not ravaged. The boy went up to her. Puppets of cowardice like me moved behind him. Reminding myself that I could have done it as well. Convincing myself that it was a fact. Looking into her eyes. The streams had put sediments on her cheeks. She was crying. Lying there and crying.

— Oh! Sweet angel thy feathers shall grow
How that will come about, I don’t know.

— Is it necessary to claim what one wants. Why not earn it? Is it a flaw in the human mind that we want things and we force ourselves to forget the right way to achieve it? Or is it just a flaw in the education system? The moral system? The code of law that has been delivered to us through the ages; through the sages? Are we sure that it does not promote desperation rather than salvation? Man is not a beast but a worshiper of cunts. Too eager to go back to where he came from. Why are the men that don’t worship this slit in the human genome; despised?

— Nietzsche said that man is the stepping stone, the middle of a rope which connects the evolution of apes into super man. This is how it was supposed to be. Probably. If you want to believe it. This was how nature intended it to be. But then the gods came in and then apes became man, only to become apes again. The complete evolution of evolution.

— The power of wrist;
The wisdom of your fist;
Your dramatic wonder;
Divine nature;
Is, all, lost.
Because
We lacked
The dream.

So I say to you come I will show the ape-man.