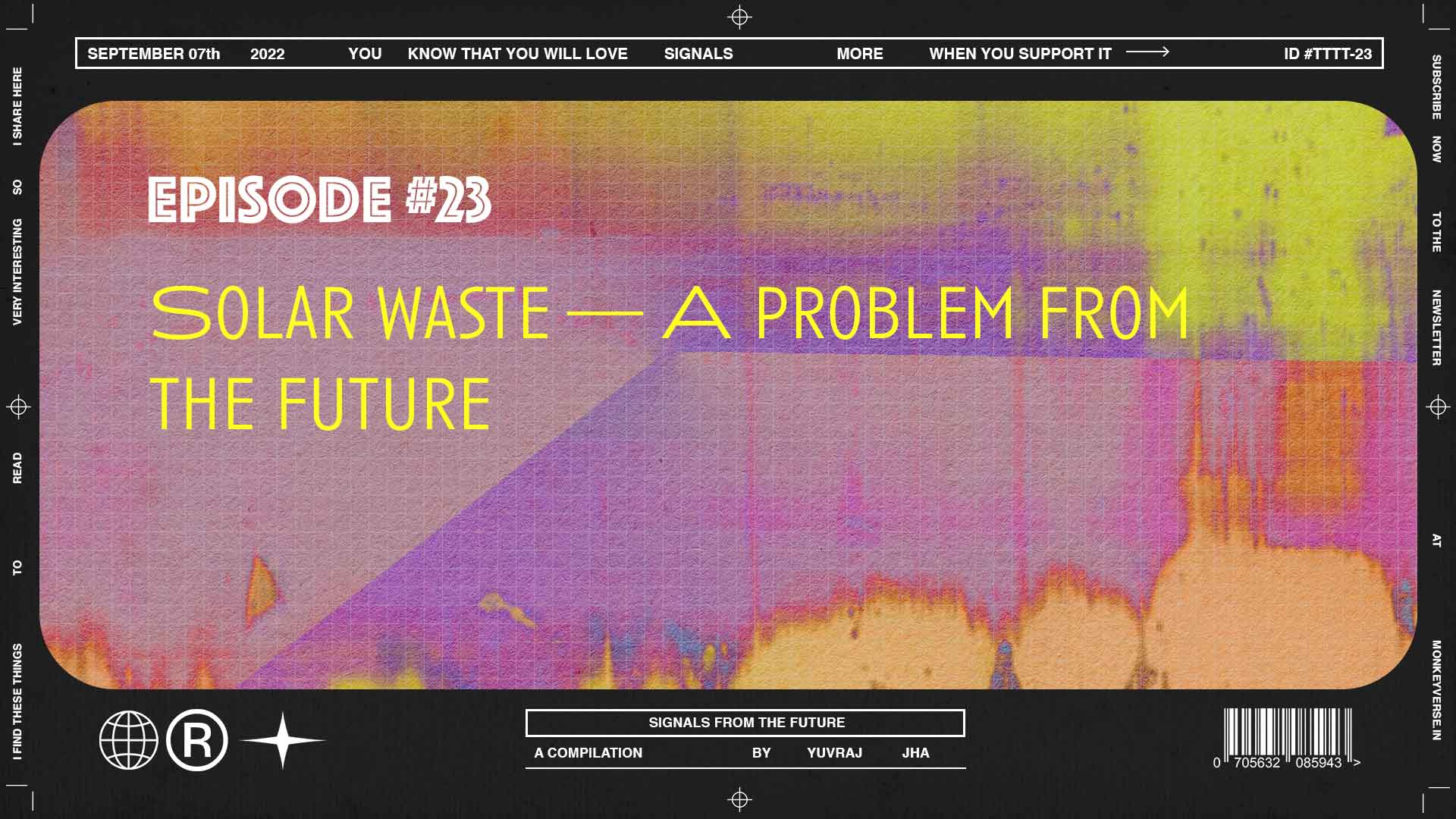 September 7, 2022 Signals from the Future

Solar waste — A problem from the future

The approach to phasing out dirty energy with renewable sources on the surface sounds like a win-win scenario until you consider the life cycle of these solutions and the eminent threat they pose as eventual waste. Solar panels, for example, have a life span of 25-30 years, where, reportedly, the average solar panel break apart in 6-10 years. Which is extremely low when you consider the scale of implementation and lack of recycling facilities to tackle the issue at scale. A scary proposition when you consider the environmental and health costs over time.

The minerals used in Solar panels for example, can be re-harvested but the problem is that land fills are a much cheaper alternative to sorting, processing, recycling, etc. And with not enough incentives to monetise these opportunities or governance policies in place we are soon to be faced with a new kind of problem in the foreseeable future.

As is the case in China already where waste mismanagement is already wrecking havoc on its rivers and landscape due to lax norms and policies.

How will India handle the 34,600 Tonnes of solar waste coming its way

Yes, we are about to be buried under 34,600 Tonnes of solar waste. And what will we do?

According to Down to Earth magazine, “Between August 2017 and January 2019, the National Green Tribunal (NGT) has, on three occasions, asked the government to frame policies to address the disposal of solar panel waste. In January this year, a bench headed by Raghuvendra S Rathore expressed concern over the dearth of government policies related to disposal of these panels…By default, PV waste is guided by the e-Waste Management Rules, 2016, which puts the onus of disposal on manufacturers under the Extended Producer Responsibility (EPR).

“But there is absolutely nothing in the policy as to how the country will handle its solar waste. The government must think on the lines of EPR, which is meant for electronic goods,” says Swati Singh Sambyal, programme manager, Municipal Solid Waste, Centre for Science and Environment, New Delhi.”

But negative viewing aside, PV recycling is also a business opportunity with the potential of billions given the scale of investments already made. Companies such as PV Cycle and SolarCycle are already working to bridge the gap in other countries with Europe being ahead of the curve by a margin. But here in our country there seems to be silence on the topic so far with the government focusing entirely on manufacturing to compete with China. Once again it looks like local businesses and concerned citizens might have to take on the mantle of change themselves, at least in the foreseeable future.